Almost everyday a Te Toki Waka Ama team is on the water either on the Waikato River or Lake Rotoroa in Hamilton. The city is the base for Te Toki Waka Ama, with former branches in Rotorua, Huntly and Tuakau now becoming fully independent clubs. From the time the club started 30 years ago, more than 1000 paddlers have worn the blue and white strip of Te Toki Waka Ama. Longterm, the vision is to develop our paddlers to be world competitive paddlers from taitamariki (midgets) right through to masters.

At times Te Toki has been the largest waka club in Aotearoa – rising to more than 300 members. Currently it has a membership of around 170 paddlers. Usually it just starts with parents sending their tamariki down. Then as adults hang around the water, they then start paddling and enjoying it too.

Te Toki has a real focus on young paddlers because they are the ones who are going to carry on running it later. There are a lot of different responsibilities to keeping a waka ama club operating from coaching development, programming for the training, scheduling – make sure everyone gets enough time on the water, as well as management – personal, team and overall club and fundraising.

Some people take up waka ama to try and keep them active as well as a sport they can do with their partners or tamariki. It can foster their wellbeing and support positive change. Over time, there is an automatic camaraderie, whanaungatanga, unexpected friendships. These bonds are long-lasting. 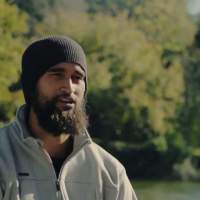 Turanga Barclay-Kerr was first on a waka ama when he was still tucked inside his mama Kim’s stomach as a baby. Now at 28 years old, he is the kaihautuu of Te Toki Waka. He first started paddling 22 years ago and has been coaching since 2012. Then in 2017, he took over the club overseeing the management, coaching and waka maintenance and transport, logistics and safety.

“It is six paddles in time and everyone paddling at the same intensity – it’s easy but it’s not easy. To make that happen takes training and commitment.

“There is a level of tikanga in waka culture that we try to maintain. It adds to cultural identity especially in a place where it is easy for Maori to be drawn away from their culture to mainstream culture and sports. Connecting to the activity on a cultural level - it is probably what makes it so natural for Maori and Pacific to paddle. I think because it’s a part of our culture. I think it’s an unconscious affiliation with the water and the paddling movement – the whole thing in general.”

Turanga says it’s important to have the right attitude and mindset. “You can teach someone how to do something, but if they don’t want to do it properly you can’t teach someone that. You can make people fit and better at paddling, but to make someone tough, then they either have it or they don’t.”

If you ask Turanga, what will make you a better paddler, he’ll say: “More time on the water.”

Te Toki Waka Ama paddlers start with our midgets but anyone can start paddling at any age. For our young adult and adult teams, we often paddle year round and compete in regional and national competitions. Members pay an annual fee. For more information, apply here.

We focus on team sports with our W6 waka teams. This is about our value of whanaungatanga and collective responsibility and growth. As well as our W6 teams, we also have single waka ama paddlers.

We also support tamariki to learn to paddle waka kopapa and compete in annual races on the Waikato River during Koroneihana.

Waka tangata and waka tete are our other waka traditions that we uphold through sharing this knowledge with groups and schools across the Waikato and beyond.

Te Toki hold their own regattas on Waitangi Day and in the early summer in Hamilton, which are held especially so the taitamariki get the chance to paddle in a competition because many are not available for the National Competitions. The Waitangi Regatta is also sanctioned by Nga Kaihoe o Aotearoa, which is also used as a fundraiser with corporate races. For more information, apply here.