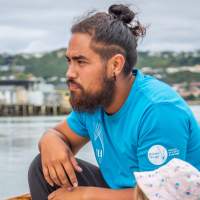 John-Reid was first initiated into Waka Kaupapa in 2006 under the guidance of our Tohunga Waka, matua Turanga Hoturoa Barclay-Kerr. However, his mid-teens life intervened and he switched focus to gain a trade qualification but in 2015, after graduating and having given back to those who nurtured, trained and guided his career, John-Reid returned to Waka, accepting an invitation from matua Hotu to return to bring Haunui home from the Pacific.
A pivotal moment indeed as this fortuitous opportunity would not only afford himself a valuable re-connection to Waka Kaupapa but, more so, the re-awakening of his desire, passion and the yearning John-Reid didn’t realise he had for Waka Kaupapa and sailing.

John-Reid feels honoured and privileged to be a part of the first generation in Aotearoa to have the revitalisation of Waka Hourua kaupapa present since birth. The decision to not continue a career in engineering and pursue life sailing waka-hourua was easy however, the journey to date, like all journeys that aspire to follow in the footsteps of giants like whaea Ema Siopes footsteps, has been and continues to be, “Hard bloody work”. The goal remains the same, “Kaitiakitanga”. 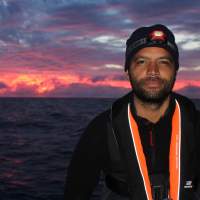 Led by a strong interest in learning how to sail, and a keen desire to sail to other countries, Dale joined TTVT in 2017. His love for waka hourua was instant. Right from his very first voyage, he knew he was in the right place. It was obvious to Dale from the start that there was more to waka than just sailing. Over time, waka hourua has revealed itself to be a doorway into Te Ao Māori that has broadened his perspective on what it means to be Māori, and has empowered his connection with Tangaroa.

Since joining, he has twice voyaged to Rarotonga, and sailed around many parts of the North Island. His experiences on these voyages have had a huge impact on him and they now shape and influence his thinking in all areas of his life. He regards the lessons, and values he has learned as a waka voyager, as being an essential part of who he is now, and he tries to encompass those teachings in his life as a husband, a father, and a business owner.

Waka captain is a role that Dale carries out with pride and he would love nothing more than to see waka hourua become a normal part of life in Aotearoa. 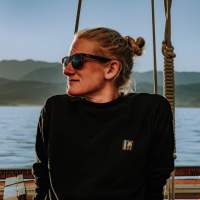 Anna is not only our admin/comms extraordinaire but one of the best bread maker, ocean lover, sailor, champion backgammon player, and the best carer for her kurī Whero. Anna was introduced to waka hourua kaupapa via waka ama. Now she’s six years deep and loving waka life! Anna loves the challenges of being in the elements, and seeing what can be achieved as a crew on the waka. She has also enjoyed learning about our Māori culture here in Aotearoa and seeing rangatahi realise their potential through the waka kaupapa, following in the footsteps of their tupuna. Since her involvement in the kaupapa, some of Anna’s longest voyages have been to Samoa via Tonga, and to Cook Islands. In her time with Te Toki Voyaging Trust - she feels she was really found what it means to have and be whānau. 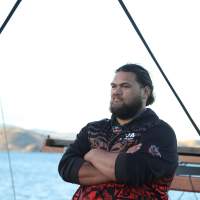 Nohorua, or also known as Aquaman, is one of our youngest full time kaumoana.
His first experience on waka Hourua was joining the crew of Haunui sailing from his home in Porirua to Kawhia in 2018.
Although his first sail was a rough ride with huge swells and high winds Noho was not scared to return to sailing in 2019. Since he finished with school he has been a full time volunteer committing as much time possible to the Waka Hourua. 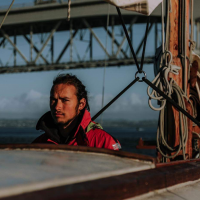 Growing up on the East Coast of Aotearoa in Tūranganui-a-Kiwa, Kahurangi Ngata first got involved with waka hourua by going for a few sails with his whānau after just leaving high school. 2019 came around and the waka life chose Kahu, moving into our whare and sailing around the motu with the whanau of Te Toki. One place you might find him is up the mast, ol’ bosun hoisted up there always looking for maintenance to do. And like many kaumoana doing maintenance on the waka, it’s not uncommon to find tools, ropes and the odd sandpaper in his pockets. A keen student of the kaupapa, Kahurangi, a core-crew of Te Toki commits as much time as he can into sailing and looking after waka hourua. 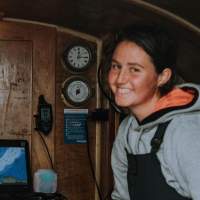 Ivy, known as Ivy Carr “whia” is also one on our full time kaumoana, born and raised on Norfolk Island. Ivy remembers seeing waka arrive to her island in the past and in October 2018 she was lucky enough to join the crew sailing from her home back to Aotearoa aboard Haunui. Following her first sail, Ivy would later return to Aotearoa in 2020 to live, committing as much time as she can towards Waka Hourua.