Te Moana-nui-a-Kiwa covers 165 million km and is dotted with island countries, some so small that often they do not appear on world maps. At a time when the British, French, Dutch and Spanish explorers were seeking to conquer new lands, Pacific island peoples with unmatched celestial navigation and ocean voyaging skills had already sailed across the expanse of the South Pacific and explored and settled its many islands, including Aotearoa – the last country on earth to be settled.

Te Toki Wayfinding takes the art of Pacific navigation - the culmination of celestial navigation, knowledge of swells, currents and winds - and ocean voyaging and transposes it into a thinking framework. Using this framework, we have designed wayfinding programmes and workshops for business, strategic planning and mental resilience. 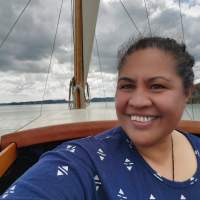 Hailing from the villages of Mulifanua and Asaga in Samoa, Faumuina Felolini Maria Tafuna’i is the daughter of Mau’u Lopeti and Nivaga. Faumuina carries her chiefly title from the village of Fasito’otai. Her surname Tafuna’i is from her late husband Patrick, and she continues to walk alongside her son, Oliver. She was born and raised in Christchurch, within the region of Ngai Tahu. In 2014, Faumuina, an award-winning journalist and ocean voyager, created a wayfinding system that takes the wisdom of Pacific star navigation and ocean voyaging and transposes it into a strategic framework. Guided by Te Toki Kaiarahi Hoturoa Barclay-Kerr, Faumuina has been developing wayfinding programmes aimed at strengthening Maori and Pacific peoples. She has worked in media, iwi communications, and development throughout the Pacific Island for local organisations, the NZ and Australian Governments, Oxfam, UN Women and UNDP. She was the first Pacific Island person to become an Edmund Hillary Fellow. Faumuina also has her own private consultancy, Flying Geese Pro.

Wayfinding for Life guides young people, in particular Maori and Pacific, to create solutions so they can navigate to their Island of Success. It takes them on a journey that looks at how things can go wrong in life, who is on their waka, explores their fears and helps them name their deep desires. It is a gentle process that empowers them to come up with real-life solutions within their reach. If you can imagine the Polynesian Wiggles delivering a resilience programme, then you are imagining Wayfinding for Life.

For a video introduction to Wayfinding for Life - click here

In NZ, Ministry of Health 2019 annual provisional suicide statistics showed there were:

Looking at those statistics, we can expect another increase as a result COVID-19 and the huge job losses and negative economic impacts.

Te Toki has a 30-year history of empowering young people through waka matauranga in the areas of waka ama, waka hourua and waka taua. Hundreds of rangatahi encounter Te Toki in its outreach programmes. It is an organisation that embraces wellbeing, tikanga, inclusiveness and creativity. It has now added wayfinding to its kete. Led by Hoturoa Barclay-Kerr ONZM, Te Toki also delivers Wayfinding Leadership and Treaty of Waitangi-based training.

This mode of Wayfinding transposes the principles of celestial navigation and ocean voyaging by ancient and modern Pasifika voyagers into a framework that can be used in a modern context. Usually applied in business and governance and development scenarios, Faumuina and Hotorua sensed that Wayfinding had the potential to help young people become more resilient and navigate life and find solutions within themselves. The proposition was that Wayfinding could help create a positive experience that young people could reference at a time where they needed to choose hope.

Wayfinding for Life came about after the tragic suicide of a 15-year-old Pacific boy in Christchurch in 2020. He had struggled with issues at school. At the same time, he was dearly loved and supported by his family at home. As the developer of this Wayfinding system, that has been used in business incubation programmes, United Nation development programmes and for entrepreneur and investor fellowship programmes and in an social inclusion initiative, Faumuina felt deeply that it could make a difference. Reflecting on this, adding to the effectiveness of the Wayfinding, is the fact that it is derived from ancestral and modern knowledge and practices that has been handed down from Pacific / Polynesian whakapapa. It is rooted in this epistemology and reflected in the names within the Wayfinding system. One of the most common feedback comments from Maori and Pacific participants is how Wayfinding resonates with them and how they feel empowered by using a system created from Pacific knowledge.

This is for groups who want a deep wayfinding experience to build team building and develop their strategy skills. It is a two-day programme and a collaboration with Te Toki Waka Hourua. The aim is to give participants hands-on waka experience from learning about the star compass and navigational pathways in a Star Dome to sailing on a waka hourua. This experience connects people to the knowledge of Pacific navigators and voyagers. This can be a transformational and bonding experience to meet and talk with the young leaders and sailors who are helping to revitalise this knowledge. For many people in Aotearoa, sailing on a waka hourua has been beyond their reach.

Building on this experience, groups then spend a day with the Wayfinding for Strategy team. Wayfinding transposes the wisdom of celestial navigation and ocean voyaging into a strategic system. This is a customised and creative experience that takes groups beyond creating goals and aims to design an Island of Success, explore who and what is on their waka, what areas of research are required to bridge the present and the future. These are some of the elements participants will explore. This programme offers a full experience that will give participants real clarity on their future vision to what their next steps are.